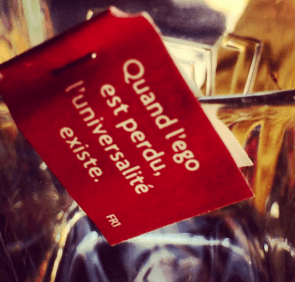 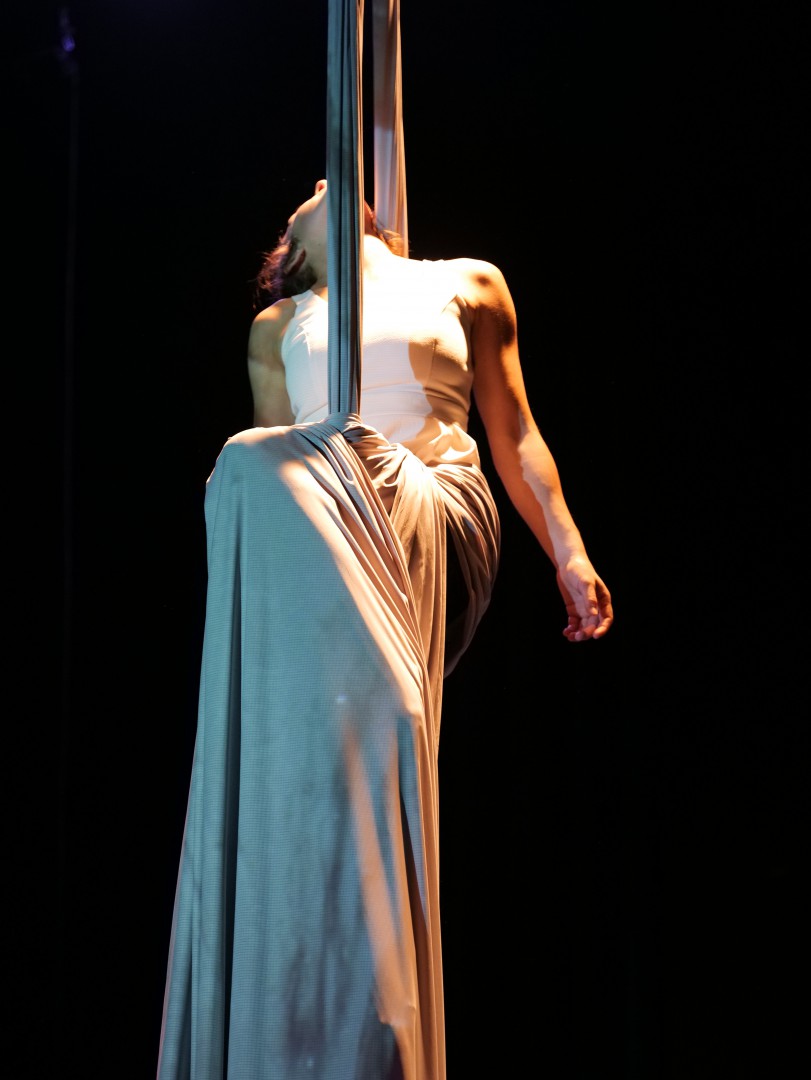 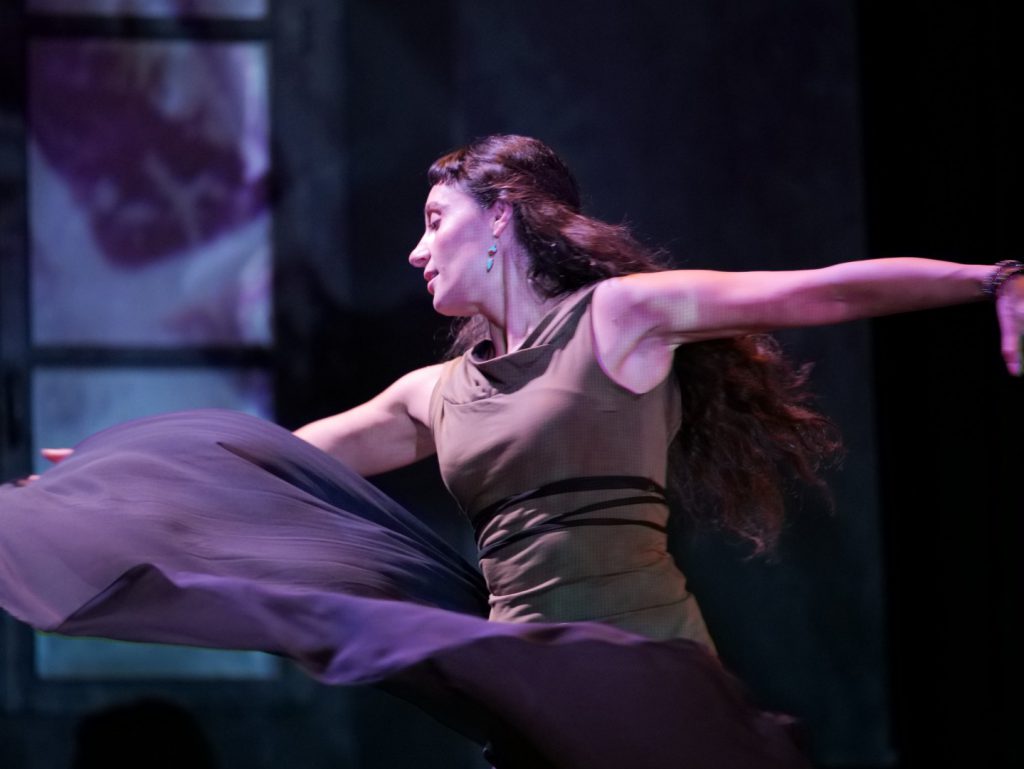 The Company was born in 2009 from the desire to mix oriental techniques with contemporary arts.

Around Barbara Goguier, actress, dancer and director who was trained in traditional Turkish dances in Cappadocia, three women who support her: Florence Ponceau, a yoga teacher who received her teaching directly in India, Delphine Allard and Nada Mousali, both passionate about theatre, dance and the East.

Beyond the demanding artistic research of the company emerges a work directed towards the general public, on the awakening of the senses and the body, intuition and creativity. Associations such as Asca, Francas, Maisons pour Tous and neighbourhood associations have called on So’ham Bugün to create links between different artistic disciplines and individuals through workshops with a social vocation.

‘The body is only the life of the journey of the soul.’ Victor Hugo

From theatre to dance, from dance fighting to words, from a flamboyant  expression to the earnestness of her artistic pursuits, Barbara Goguier is as multiple, complex and in movement as the world and life she is trying to tell.

In the late 1990s and early 2000s, she first trains at the Jean-Louis Martin Barbaz Studio in Paris and at the Orléans Conservatory, from which she graduates. At the age of 21, Barbara Goguier begins her career in the world of commedia dell’arte with the Amédée Bricolo company. With the Krizo Théâtre, she plays the role of Harlequin in Marivaux’s L’Île des Esclaves.

Between 1990 and 2003, she participates in classical dance, modern-jazz and contemporary dance shows. Among other things, she joins the Kabaret de Monsieur K (alias Jérôme Marin) and the Baaaal of the Compagnie Eponyme. In 2009, she learns traditional Turkish dances and the basics of dervish dance in Turkey and in Paris. In 2014, she learns the Feldenkrais method and Laban technique with Margaret Eginton in New York City.

She collaborates with many companies in Paris and Orléans. She has performed for Jean-Claude Cotillard, Niseema Theillaud and Sylvain Creuzevault.

Since 2003, she has directed numerous productions with amateurs and in the school environment and as part of Aux Arts Lycéens. In 2011, she shares the direction of Pièce en 6 with Hugo Zermati, which will be performed at Ciné 13 in Paris in 2016. In 2014, she directs Phèdre de Sénèque with amateurs and continues this work with semi-professional artists during a laboratory at the Maison des arts et de la musique, in collaboration with a hypnotherapist. In 2015, the Théâtre de Céphise asks her to direct an adaptation of Carole Martinez’s novel, Le Coeur Cousu.

Then, after a year of solitary research, she produces a video performance, a first version of her new project based on Victor Hugo’s texts and the sessions of the Tables de Jersey, titled “Birth of Sadaka Diwali”, which is performed at the Maison des arts et de la musique d’Orléans in June 2016.

Since March 2017, she has been working on Je crois des choses qui n’ont pas de contours (I believe in things which have no contours), a continuation of this research. She is part of Le Syndrome de la vie en rose, a project of the Compagnie Éponyme which is scheduled to tour in 2020-2021.

Éric mainly acts as a composer for the company. He is sometimes present on stage, in the background, to play live the original music he composes using sound synthesis and modular systems.

After studying in art school (DNSEP), Eric Martinen started his career in audiovisual post-production. Today he works mainly on short programs and commercials as an editor and post-production and shooting supervisor, working closely with directors and producers.

In 2014 he directed the clips House of Joy for the group Parlez-vous Anglais and Au Conservatoire for Liz Van Deuq (Monkyshot Production).

In 2013, he works as a videographer and director for the dance projects of the Compagnie Eponyme directed by Karine Vayssette. His taste for music in general, electronic music mostly, especially the sounds generated by analogical synthesizers and his need to be able to access a more immediate creative process (an example: Nuit calme ), lead him to train in 2016 at the CIFAP in sound synthesis and to follow Laurent Perrier’s courses (Zonk’t project, Pylone) about modular systems.

Jean-Paul has been a sound, lighting and video engineer in the performing arts since 1992. General manager at the Sylvia Monfort Théâtre for 5 years, he then managed the installation of the Polysonik studios facility in Orléans.

He collaborates with many companies in Orléans and works regularly in the fields of sound and video at the Théâtre d’Orléans, the Centre Chorégraphique National d’Orléans and many venues in the region as well as for various performance companies.

Jean-Paul has also toured extensively in Europe and around the world as a group soundman and theatre manager.

Jean-Paul Duché has been collaborating with Barbara Goguier as lighting designer since 2015. They began their work together during the staging of Carole Martinez’s Coeur Cousu for the Théâtre de Céphise.

Carla trained at the national circus school of Brazil with a specialty in aerials. She also studied psychology at the Federal University of Rio de Janero. She is an artist and co-founder of Circ Bover in Mallorca.

From September 1 to 14, 2018, we collaborated with Carla Fontes Dias during a residency at the C.IN.E Theatre in Mallorca. The next collaboration will take place at Cheptel Aleïkoum from 16 to 21 September 2019.

An experienced self-taught musician, guitarist, composer and tinkerer, Mathieu Gaborit dit Ayato is one of the active members of the H.A.K. lo fi record collective/label.

He also shares the stage with Han Bennink and Terry Ex, Alexei Borisov and Olga Nosova, Aki Onda, … during shared sets and participates artistique residencies with Albert Marcoeur (Drama_HAK n°81) and on the work of Valère Novarina with the European translation workshop at the Orléans theatre (the deflated bagpipe hak n°163). Several of his sound and radio productions are published and broadcast (NAISA – Toronto Canada, CONA-Ljubjana Slovenia, Radius_Chicago usa). He participates in many tape-related projects. He leads tape sound design and image workshops (Dunkerque Noordov’ art festival, Portes).

With Cent soleils, he leads a sound documentary workshop. He has several projects with the humanitarian circus The Serious Road Trip and a tour in Romania (July 2012; cirque_ciné concert) and The Carnival of Colours in Derry; Northern Ireland (2009 circus, ciné concert+cabaret+parade).